When talking about Nornir and Ansible, speed is one of the topics that come up from time to time. A common argument for Nornir is that it performs better when working with either many hosts or lots of data. For some who hear this, it isn’t entirely clear what we mean. This article will look at some numbers. Recently I came across a quote by Kelsey Hightower that stuck with me.

“You haven’t mastered a tool until you understand when it should not be used.”

Let’s see if any of that can be applied here.

How we got here

A few years ago, I tended to solve a lot of my problems with Ansible. As the tool could work with several devices in parallel, it fits with a lot of the things I needed to solve. One day a client asked me to collect data from some IOS XR devices. They needed to create a graph of some information that they couldn’t access using SNMP. At the time when we did this, the only way to collect the data was by issuing show commands through the CLI and parsing the information.

The output from the “show dhcp ipv4 proxy binding” command looked like this:

I created an ntc-template and my idea was to collect the data with an Ansible playbook that parsed the data, then sent it into InfluxDB so that it could be visualized using Grafana. The exact timestamps wouldn’t matter that much since the goal was just to see how many customers should normally be BOUND to each VRF and if there was an issue the on-call staff would be able to see if a current situation was normal or not. For that reason, I just normalized the timestamp and scheduled the Ansible playbook to run every five minutes. After the first run, it all fell apart as it turned out that the playbook wasn’t able to finish within five minutes.

At that time Nornir didn’t exist and to solve the problem at hand I wrote my own tool to collect the data. For an example of what such a tool could look like today, you can find some inspiration here

One could argue that I was stupid all along. Of course, Ansible isn’t the correct tool to gather data. On the other hand, when working with network equipment even just for config tasks I found myself often using the register option in an Ansible playbook to store some variable state from network devices.

What about generating templates

A scenario that is perhaps more common is to generate configuration from templates for network devices. I decided to compare how Ansible compares to Nornir for this task and how the inventory size impacts the speed. The inventory was one I generated using the Faker library, you can find the script for this in the code section.

The templates used were very basic, the one for Ansible looked like this:

While this is the one for Nornir:

The first test was using an inventory with 1000 devices. When starting the Ansible Playbook on my Macbook Pro, it was as if it just started a session of high intensive training, a few seconds in the internal fans are giving their all. The playbook ran for several minutes.

To do the same within Nornir the code looks like this:

Nornir completed this task in just over two seconds. As I was running this on my laptop both of these examples, of course, had to compete with other processes that were running such as Spotify and whatnot. In order to make the comparison a bit fairer, I set up a machine at DigitalOcean with dedicated CPUs and ran a few more tests there.

I generated different sized inventories based on 100, 1000, 5000 and 10000 hosts and then looked at how many seconds it took to run the tasks using Ansible or Nornir.

It should also be noted that all of this happens without touching the network, it’s just the time it takes to prepare the data before going out to the network. You will however see the same behavior when gathering data or facts from the network.

I ran the tests with four different inventory sizes.

I could have done more tests with larger inventories too, but I was paying by the hour. One thing to highlight here is that whe you add twice as many hosts to the Nornir run it more or less doubles in time. Using Ansible doubling the amount of hosts or data will more than double the time.

Looking at the above output in a diagram is very telling. 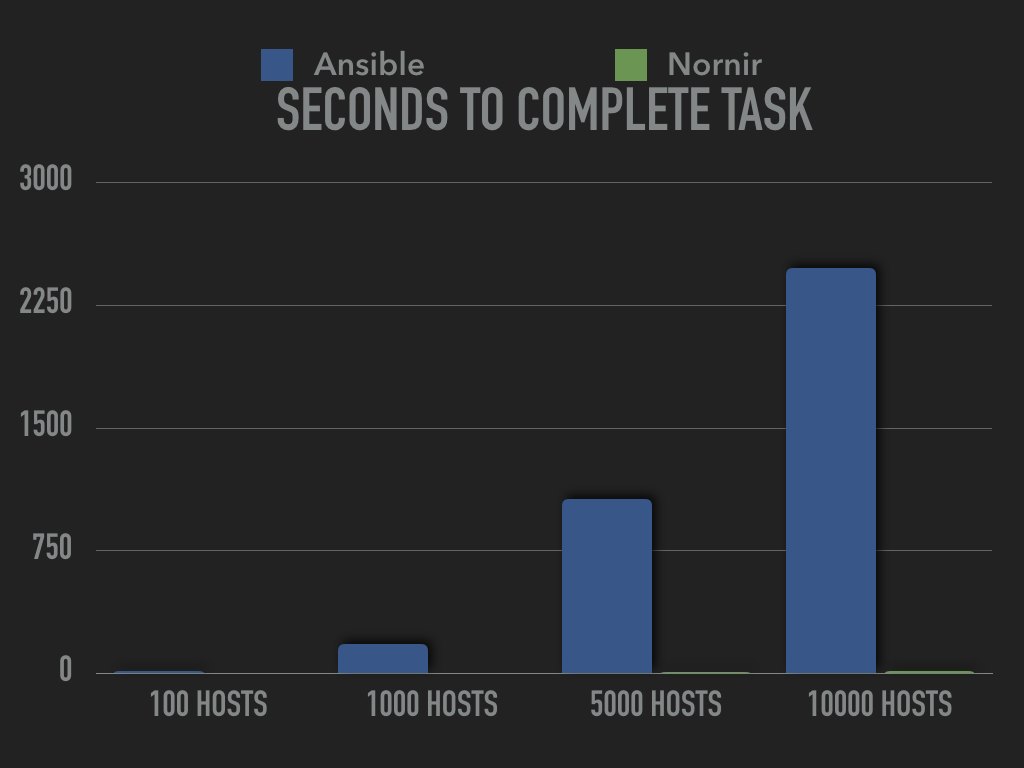 It may appear that the data for Nornir is missing in the first two tests, it just looks that way because the bar would be so small. Even the other bars are hard to see. It’s easier if we remove the data for the Ansible tests. 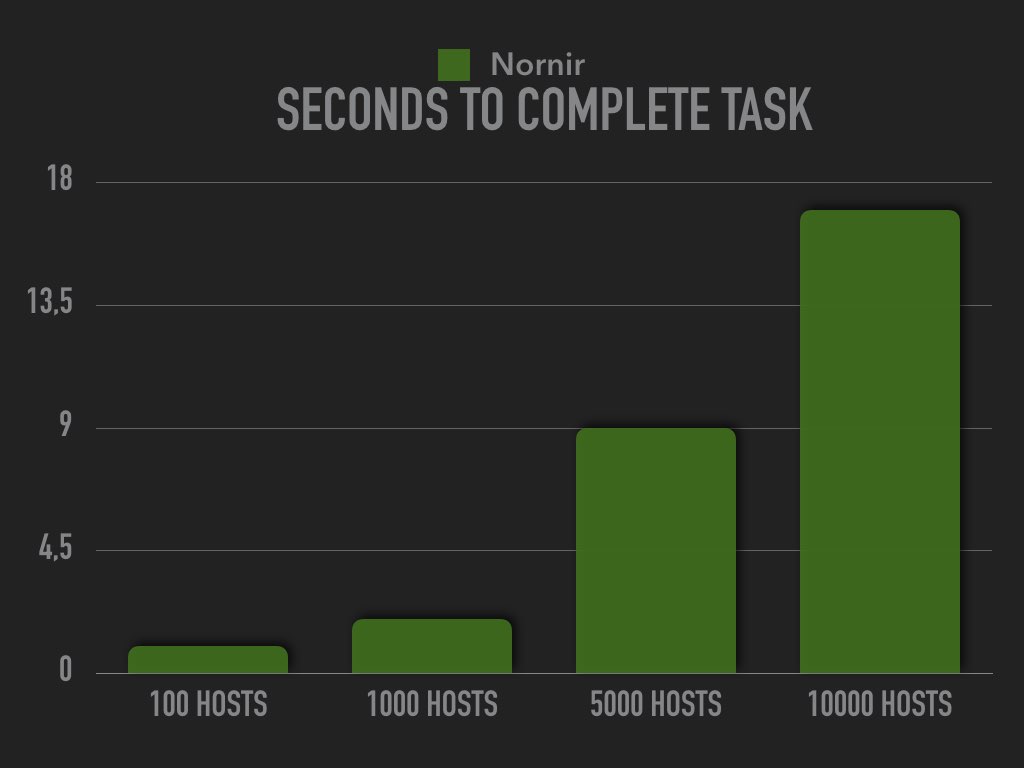 When running the tests I used the default forks in Ansible and num_workers, however for this scenario / problem it doesn’t really matter since all of the processing of the data is done on the host regardless if it’s Nornir or Ansible being used.

The above is just an easy to illustrate an example, remember I hit a ceiling when using around 90 devices and the issue there was the amount of data. The main problem seems to be that Ansible is serializing and deserializing JSON data between every task and internally within the core, at some point this becomes problematic.

It could be that you are collecting some facts from the network and want to use those facts later on in the Ansible playbook.

Is speed that important?

This, of course, depends on your situation. In some scenarios, it could be absolutely critical. A lot of time it doesn’t matter that much, especially when we are talking about background tasks. A big pain point for me is if I have to wait for a computer to complete something, I always try to minimize that time. Having said that I wouldn’t say that speed would be my main argument for using Nornir. Likewise, there’re a lot of scenarios with Ansible where the numbers above are completely irrelevant.

I hope that I’ve shed some light on the discussion about speed when working with data within Ansible or Nornir. Again the findings here might not be relevant for your situation, but it’s something to keep in mind. If you want to take a look at the code used in this article look at the networklore-demos repository within the python/nornir/ansible-nornir-speed directory.